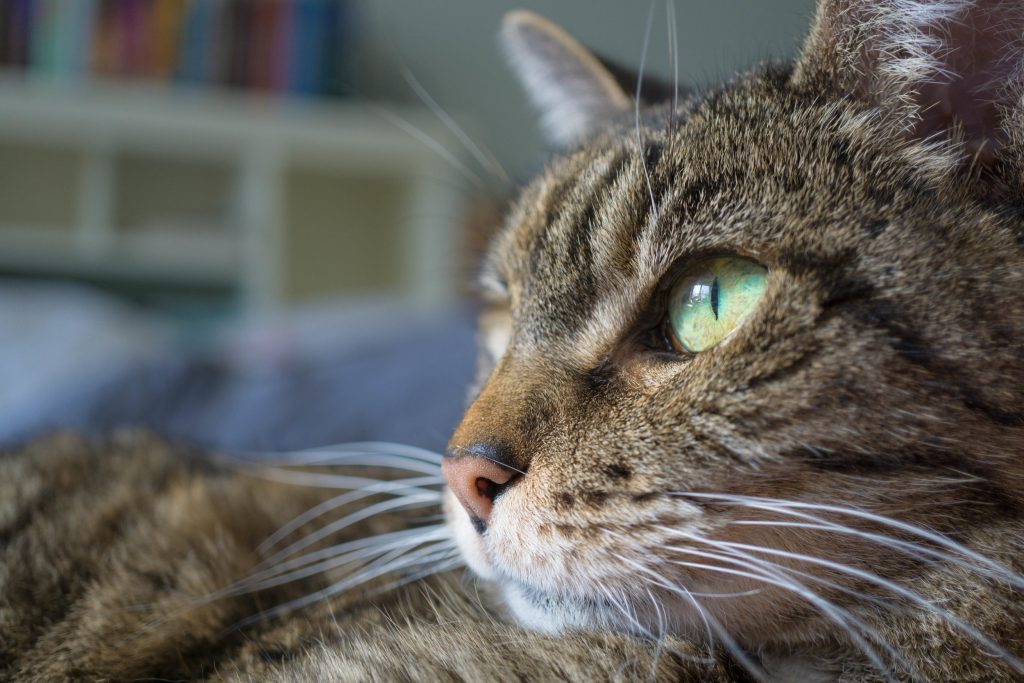 My daughter was five years old when she, along with a neighborhood friend, secretly fed a stray cat in our backyard.  The cat had no identification as to whom she belonged to, and she had been hanging out in our yard for a while.  My daughter felt sorry for her and didn’t want her to go hungry.  We weren’t looking to adopt a cat, but the universe had other plans.  This was around the summer of 2003.

After that one feeding, it was official and she immediately adopted us  (maybe she already had), and we named her Ashland.  She continued to live outside or on our screen porch and to oversee the backyard and the farm that was behind us at the time.  It was a haven for her to hunt and to show us her gratitude by bringing us various offerings. 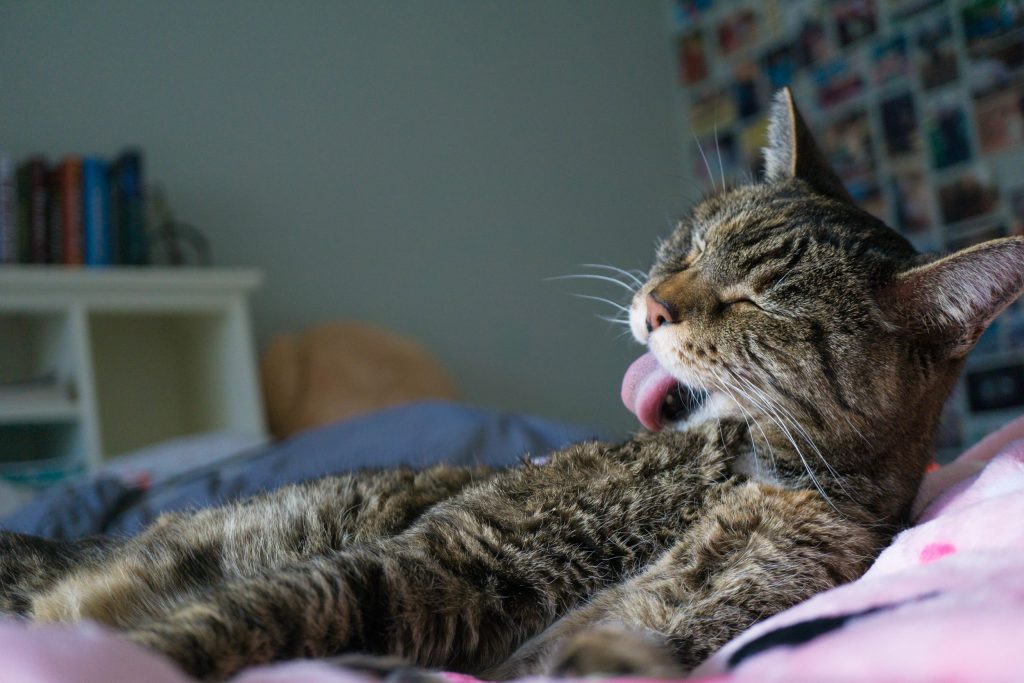 She was gray striped but was unusual in her build.  She was more significant than most domestic cats especially her paws and head.  She was also unusually smart in her communications with people and with other animals.  If not she would have surely not survived so long.  We took her for a check-up when the “adoption” was official, and the vet estimated that she was around 3 years old.  Ashland spent the next 15 years with us.

She became an integral part of our family, and our beloved teacher, companion, and greeter to all who stepped onto our property.  She was my yoga assistant when I started teaching and would hold classes on the back patio and she on the backs of the attendees.   Once my classes moved inside, she became my greeter.  I received many comments from students about being greeted by her and many questions on a rare day that she wasn’t there, which would happen as she got older and spent more time sleeping in her heated bed.   As a matter of fact, no one ever seemed to mind Ashland’s presence.  She had a way that was pure, unconditional, and loving.

“She was my yoga assistant when I started teaching and would hold classes on the back patio and she on the backs of the attendees.” 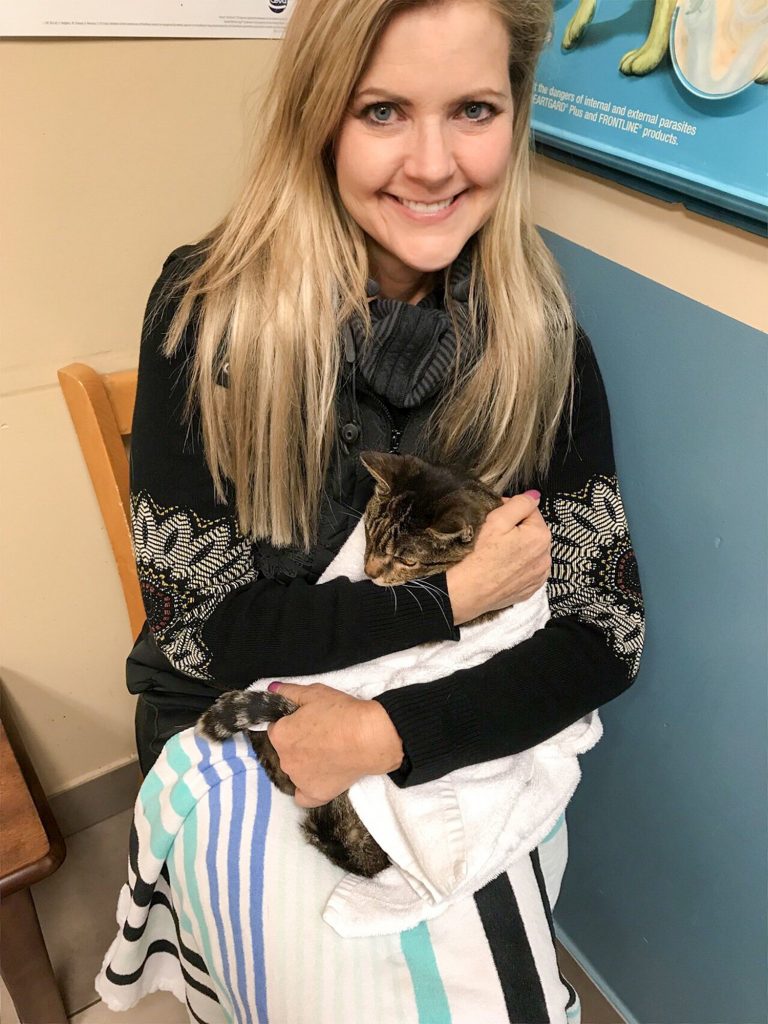 As I held her close wrapped in a blanket and next to my heart in the vet’s office after learning that she was in kidney failure; in her usual fashion, she was in complete surrender to the situation.  But this time, the case wasn’t a porcupine or raccoon that had muscled its way into the back screened in porch to help itself to Ashland’s dinner.  It was more severe than that.   As I held her, the last 15 years passed through my mind, and I was reminded of all she had taught us about life.  I am sharing the wisdom of Ashland below.

It didn’t matter what the circumstance Ashland was always ready to greet, meet, and love.  She never seemed angry even if we were late in feeding her, or gone all day and even all week, as soon as we returned she was there waiting to greet and show her love.

Ashland was the most loving gentle cat I have ever known, and I have been a cat person my entire life.  My parents used to joke that the cats would always find me and if I look back on my experience with them, I would have to agree.  Ashland was consistently steadfast in her unconditional love.  She was a lap cat early one, but later as she got older, she liked to sit beside you.  She had the most inviting big eyes and a warm heart.  It was if she already knew everyone that she met.

Accept your situation, but don’t give up.

She accepted every situation with grace.  She would wait patiently for her moment and then would go onto the next with grace patiently waiting again.  But she never ever gave up.  She seemed to know that the situation is always changing and all we need to keep moving and to keep holding hope.

You can always choose how you react.

So many times Ashland found herself in compromising situations that could have lead to injury or death.  Whenever danger was near, she wouldn’t react by being defensive.  She would respond by being in full surrender.  It was if she would become invisible, and since she wasn’t a threat, the other animal wouldn’t even notice her.  Even though the other animal was usually taking something like Ashland’s food, she made no fuss about it.  She allowed them to have it, without even so much as a sound. 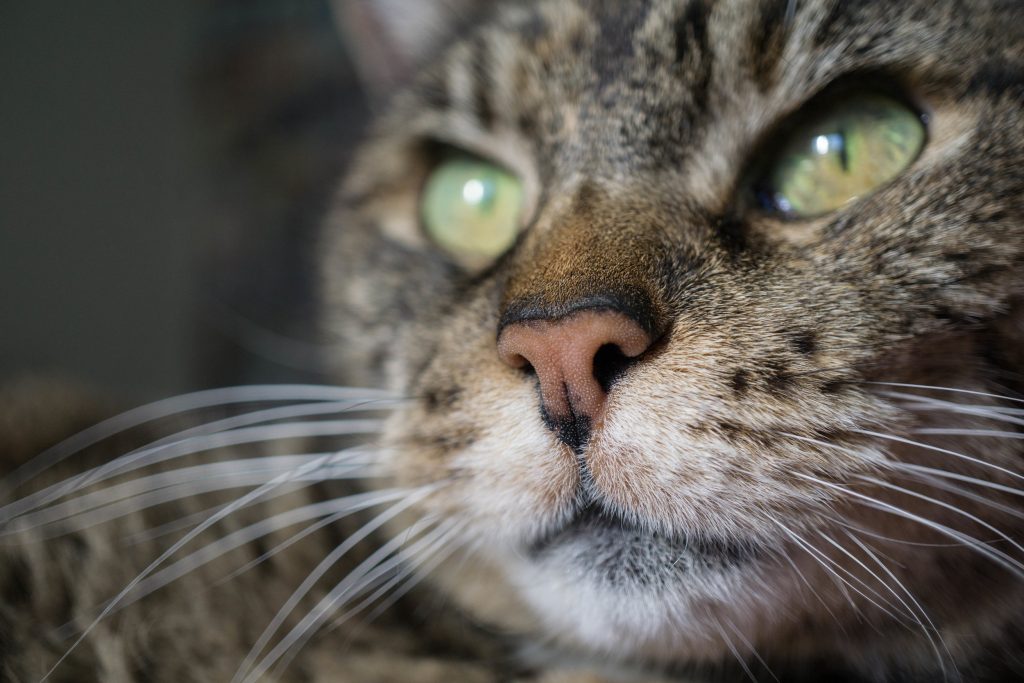 Surrender is a superpower.

What Ashland must have known is that surrender is a superpower, not a weakness.  Without her ability to surrender so completely, she would not have made it through 18+ human years.

Even with nine lives, time runs out.

What struck me most as I was holding Ashland for the last time in my arms was that even a cat with 9 lives eventually runs out of them.  What also struck me is the remembrance that none of us are getting out of this alive, and that we know not when the day will come.  We had almost lost Ashland 3 months earlier, but after surgery and a lot of loving care she had rebounded and just a few days earlier had been doing better than ever, then just like that, her progress stopped, and her downward spiral began. 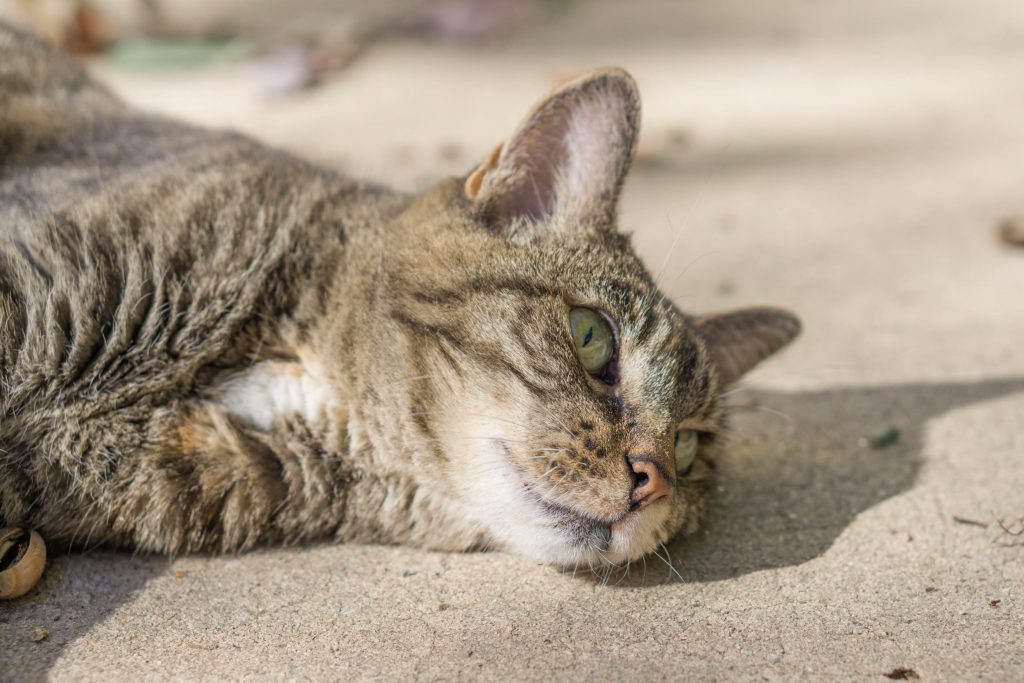 “Ashland reminded me of the irony of this life. To be ready and willing to love hard and hold on tight in one moment and to surrender, letting go in the next.  ”

To love and live on purpose with all you have in each moment.  That knowing when to surrender is a super power, can be life saving, and can make for an easier transition.

For me it was a true gift to once again see a loved one off to the next realm, as I was able to do with and for my mother.  I will never forget you Ashland or the life lessons you so freely shared, for the love you so generously gave, and for making the last 15 years so meaningful for so many.  Thank you for choosing us.  RIP.

An Addendum: Our Loved Ones Are Still With Us. 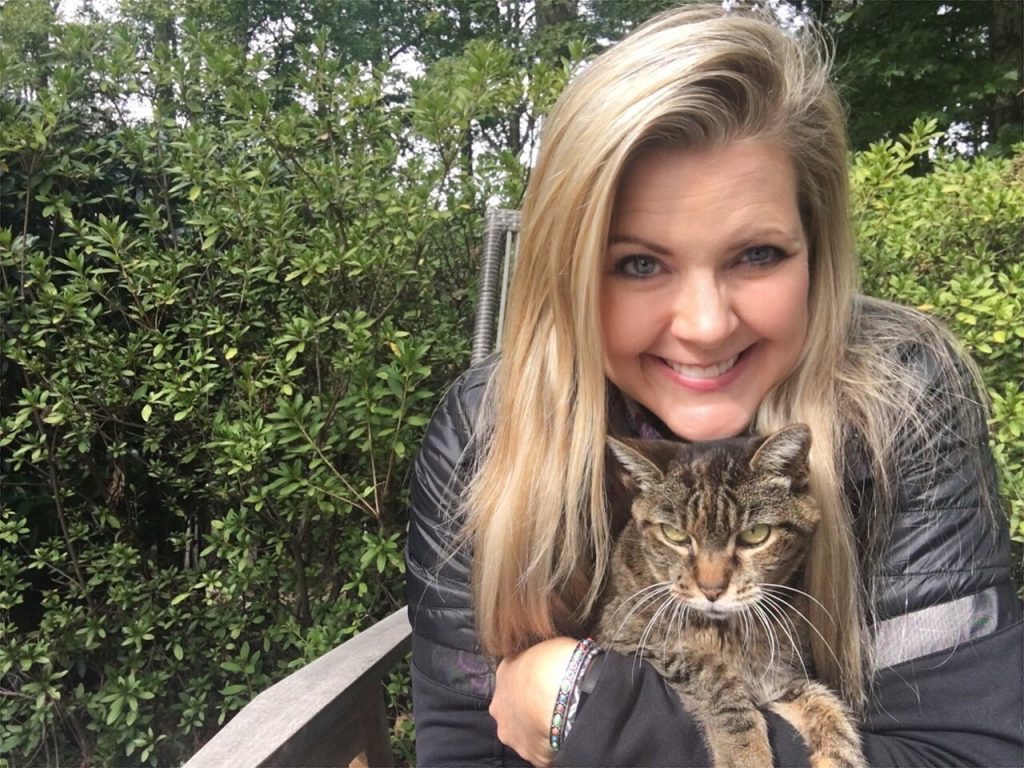 I had just finished writing the last paragraph above when the doorbell rang.  I assumed it was an amazon delivery and would not normally get right up to retrieve it, but a gut feeling compelled me to do just that.  I walked downstairs and opened the front door and to my surprise there were a dozen beautiful yellow roses in a vase on my doorstep.  Speechless, I retrieved them and the message that was included.  They were from Chewy, the company with whom we have bought Ashland’s cat food for years.

We had just ordered a case of her special food the day she died.  When we notified Chewy of Ashland’s passing and asked if they could cancel the order, they quickly emailed back that it had already shipped, but that our account had been credited and suggested we donate the case of food to a shelter.  And now they had sent a beautiful bouquet of yellow roses. This would be extraordinary story about a company that truly cares and provides exceptional compassionate service by itself, but there is more. 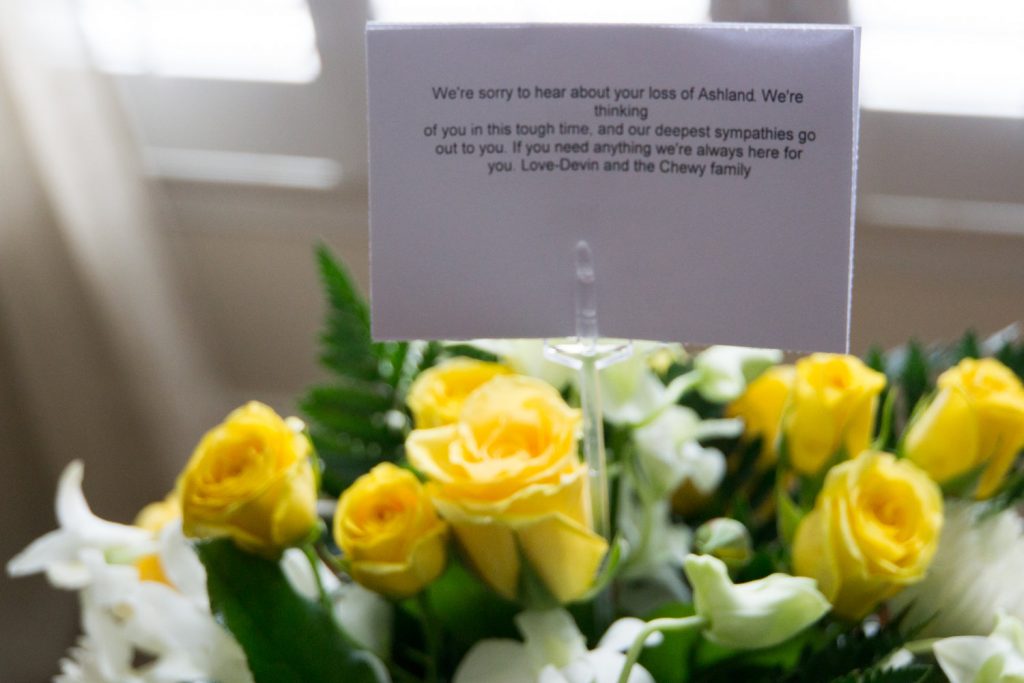 I have always felt Ashland was here for a reason.  Actually I have always felt she was connected to my father’s spirit.  The greatest regret I have about my father was not being able to be with him when he passed away.  He was in the hospital and we had been holding vigil there, but after a few days I had insisted my mother go home, take a shower, and get a little rest.  He passed away while we were gone.  I had never been able to make peace with that.  As I wrote that last paragraph the guilt still pierced my heart, 18 years later, of not being there when he died. (My father died December 10, 1999 and Ashland showed up in 2003 and around 3 years old.)

I was reading the sentence about being able to see Ashland through her passing when the doorbell rang and I felt compelled to go answer it.  You see my father’s favorite flowers were yellow roses.  They were on his casket and placed inside at his burial.

You can forgive yourself and let go of the guilt you have been holding for all these years.  This is how I choose to see it.  A friend of mine would call it a “God-Wink”.

I would call it another one of Ashland’s amazing gifts.

Callings From The Soul, Part 2: What To Do When You’re Lost
Next Post: How Grief Manifests in the Body